Shianshenka is the third planet from the centre of the multiple system of Trahania. The extraordinary feature of this system is the double sun at the centre: a yellow and a blue star comprise the most unlikely tandem in the Universe. The discovery of life flourishing in this system was a sensation. Trahania was only the second multiple sun system known to be able to support life. Down on the surface the composition of gases and volcanic debris in the atmosphere shift the light from the suns towards the red end of the spectrum, causing the yellow sun to appear red, and the blue sun to appear green.

Shianshenka itself is a small dense planet, with about the same diameter and weight as Mars in the Helios system. It is a water world dotted with thousands of small and rather volatile volcanic chains and islands. Its atmosphere is rich in sulphur dioxide and nitrogen dioxide, making the oceans extremely acidic, and the surface suffocatingly warm by human standards. The multiple moon system is also strange phenomena: the moons appear to have been the remains of a twin planet, since they share the same orbit around the planet. They orbit in fact in a chain, and are the only moons known to do so in this part of the galaxy.

The moons as much as the twin suns are responsible for the nature of Shianshenka. Their total weight is nearly one quarter as much as that of the planet, and their gravitational pull as they orbit Shianshenka causes the planet to wobble wildy on its course around its double sun. The effect on Shianshenka is much the same as the effect of Jupiter on Io and Ganymedes: the planet is in a continuous state of volcanic unrest. As is often the case in our Universe, it is the very forces of destruction that are the harbingers of life. On Shianshenka all life forms are dependent, directly or indirectly, on the volcanic forces that drive the planet.

The name Shianshenka means place of geysers. It is not difficult to imagine the moods of a place governed by day first by a red sun, then by a green, while the night sky is dominated by a chain of huge moons, themselves reflecting the green or red of whichever giant is in ascendance.

Map of the Homeland 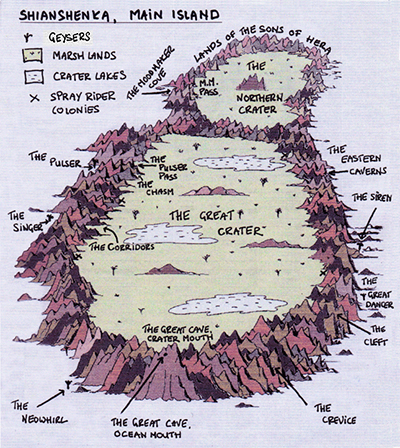